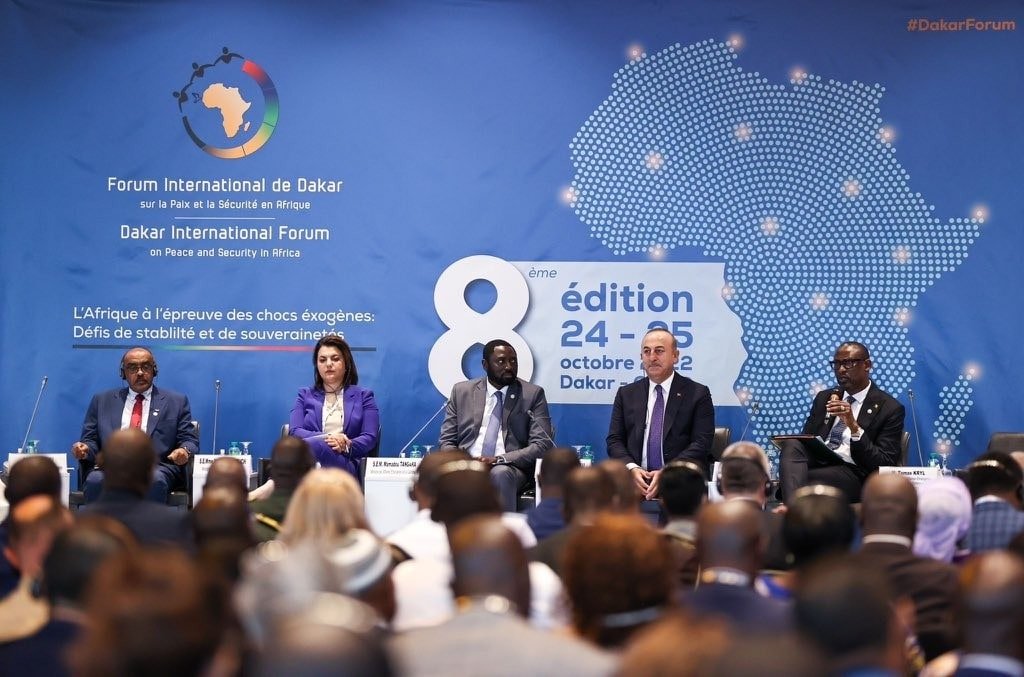 The article was written by Regina Ouattara (Burkina Faso), former GENSAC Regional Focal Point for Francophone Africa. Travel and participation to the Dakar was sponsored by GENSAC. The views and opinions expressed in this article are those of the author.

The eighth edition of the Dakar International Forum on Peace and Security in Africa was held on 24-25 October, 2022 under the theme: “Africa in the face of exogenous shocks: challenges of stability and sovereignty.” This annual meeting of exchange and reflection on peace and security issues in Africa brought together Heads of State and Government, and the representatives of inter-African and international institutions, NGOs, civil society organizations, researchers and the private sector. This year’s edition of the Forum, under the auspice of H.E. Macky Sall, President of the Republic of Senegal, honored Portuguese-speaking Africa with the participation of, among others, the Angolan President Joao Lourenço and his Cape Verdean counterpart José Maria Neves. France, the main partner of the event together with Japan, was represented by the Secretary of State for Development and Francophonie Chrysoula Zacharopoulou. Among other attendees were also foreign ministers of Mali, Guinea, and Turkey.

Challenges of Stability and Peace Dynamics: Facing the Realities of Africa

The Dakar Forum was held against the backdrop of the growing threat of terrorism, the resurgence of repeated coups d’état in West Africa, foreign politico-military interference, the combined effects of climate change and the COVID-19, and the war between Russia and Ukraine. This setting offering gave participants an opportunity to face the realities of the continent and to reflect on appropriate and urgent responses.

Among the topics discussed were security sector reform issues and military cooperation between Africa and its partners.

“Why always go looking for solutions outside?

At the opening of the forum, a series of high-level panels moderated by various personalities, focused the discussion on the responsibilities of African governments; in particular on their inability in some cases to protect their populations and to create minimal conditions necessary for peace and stability as well as for inclusive and sustainable development. However, it also emerged from the discussions that multilateral system, with its inherent drawbacks, prevents the African continent from developing and strengthening its capacities in order to be able to cope with both external and internal shocks.

If, during the early editions of the forum, the African participants clamored for greater engagement of international partners on the continent, now, the African governments affirmed their willingness to take the lead. Especially since the external interventions have shown their limits in securing peace on the continent.

The forum participants asked from the international partners to show solidarity by providing African states with logistical and financial support. Leaving it up to the African governments to find appropriate solutions to the various problems on their soil. This is an approach that marks a turning point, or an evolution, of an existing doctrine without breaking relations with technical and financial partners whose support remains very important in the current context as the terrorist threat is gaining ground in West Africa.

The participants also denounced that Africa, the cradle of humanity, is not present in the world’s most important political and security deliberations. This, combined with its senseless absence in the economic decision-making bodies, has only further accentuated its marginalization.

Furthermore, during the discussions, the idea was put forward to rethink international relations with a flourishing Africa that takes full advantage of its potential. The suggestion was made to integrate Africa among the permanent members of the UN Security Council. This body was set up at the end of the Second World War, that is to say fifteen years before the independence of African countries which were at the time under colonial domination. The major difficulty, however, remains that the African states are not able to agree on the choice of a representative for a single African seat. In reality, rivalries persist between the continent’s biggest powers such as South Africa, Nigeria, Egypt, and Algeria.

Some questions or grievances could not be satisfactorily answered at this eighth edition of the Dakar Peace Forum. For example, Senegalese President Macky Sall used the forum’s podium to re-launch his plea for a reform of global governance in order to involve Africa and secure an “update” to the doctrine of peacekeeping operations in order to “fully integrating the fight against terrorism.” This is a repetition of a familiar request made by many other African Heads of State who consider the peacekeeping force to be ineffective and would like to see the blue helmets officially empowered to fight terrorists. On the ground, the effectiveness of the peacekeeping force is certainly limited, especially in protecting civilians. Unfortunately, the UN peacekeepers are not a standing army. The role of peacekeepers on the ground is to support the implementation of peace agreements. Therefore, they must display neutrality and impartiality, which is incompatible with the fight against terrorism.

During the two days of work of the Forum, plenary sessions were coupled with workshops on various issues and focused on themes such as strengthening of state sovereignty.

After a plenary discussion on global crises and sovereignty in Africa, dialogues continued in various workshops on topics such as:

The forum has seized, once again, the opportunity offered by the presence of countries such as France, Japan, Saudi Arabia, etc., to launch a vibrant appeal to better engaged African countries which are ready to shoulder more responsibility in strengthening global democracy, sovereignty, and progress.

“If the continent has become, today, one of the epicenters of terrorism, it is because this scourge is fueled by cross-border crime, the illegal proliferation of weapons, financial flows and illicit trafficking of all kinds and the participation of foreign fighters.”

One of the Forum’s highlights was the discussion about the digital violence that are now one of the most serious threats to peace, security, stability and sovereignty of African countries; threats that are all the more difficult to combat because they are diffuse and ever-changing. Thus, cybercrime is added to the daily frenzy of social networks that have become a massive factory of fake news and manipulation. The participants discussed the urgency to strengthen the ways to fight against these issues.

The eighth edition of the Forum delivered on its promises just like the previous editions. This annual meeting is a real incubator of social transformation projects based on open dialogue. Many will still recall that projects such as the Dakar Cyber Security School has come out of the previous edition of the Dakar International Forum. It is important that Africans keep the flame of this annual meeting alive.