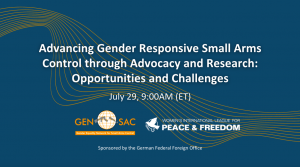 Join us for a virtual side event to the seventh Biennial Meeting of States to Consider the Implementation of the Programme of Action on Small Arms and Light Weapons.

This session will present the findings of recent research on gender responsive small arms control conducted by civil society organizations such as the Women International League for Peace and Freedom (WILPF), Small Arms Survey (SAS), and the Gender Equality Network for Small Arms Control (GENSAC). Additionally, it will highlight the challenges that research institutes and grassroots organizations face when it comes to collecting data on the gendered impact of small arms misuse and small arms control.

Folade Mutota is Executive Director and one of the three founders of the Women’s Institute for Alternative Development (WINAD) based in Trinidad and Tobago.

Fairlie Chappuis is an independent consultant. She has researched methodologies for peace and security studies as well as urban security with a focus on West Africa, North Africa, the Middle East and Central America.

Daniel de Torres is the director of the Small Arms Survey. Prior to joining the Survey, he worked at DCAF – Geneva Centre for Security Sector Governance.

Khudher Hamad Hassan is a lawyer and human rights activist who has been involved in collecting data on ISIS violations and crimes. He has worked as a researcher with Asuda to collect data on human rights violations in the city.

Anne Atambo is a Gender and human rights advisor at WILPF Kenya. Anne has competence in analysing the impacts of SALW on women in rural and marginalised settings, gender mainstreaming and women empowerment.