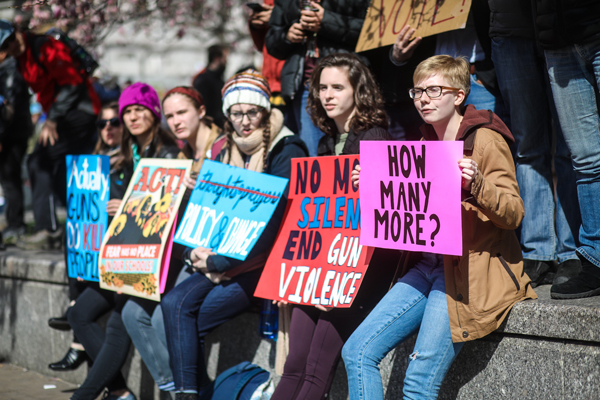 By Liv Tørres, director of the Pathfinders for Peaceful, Just and Inclusive Societies

“We all have family members who were killed or injured by small arms.” Scanning a conference room in Berlin earlier this year filled with members of a new network of women organizing for small arms control, a Balkan woman solemnly counted the number of participants’ family members who had stared down the barrel of a gun or were killed. So, if you’re wondering what women have to do with small arms control, the answer is evident: everything.

Every year, more people in non-conflict zones are killed as a result of injuries from small arms than in wars or other conflicts. The majority of those killed are men, most often by other men. From each act of small arms violence, numerous others are physically hurt, threatened and/or traumatized. Many of the victims of this violence are women. Too often, they are threatened, violated, and attacked by men who wield small arms. In the context of the COVID-19 pandemic, this situation has worsened, with firearms sales skyrocketing in many parts of the world. As a result of the health and resultant socioeconomic crisis faced around the world, domestic violence has increased at an alarming rate. And with instability and polarization on the rise, things will get worse. So yes, the mobilization of women is definitely relevant for small arms control.

2020 was expected to be a crucial year to accelerate the implementation of the Beijing Declaration and Platform for Action, twenty-five years since its adoption. The Declaration explicitly links the arms trade to armed violence and outlines how women are both victims of armed violence and pivotal voices in arms control and disarmament efforts. But instead of accelerating progress on the Women, Peace and Security Agenda, we now find ourselves in the midst of a global pandemic, and amidst palpable concern that COVID-19 will push back fragile progress made towards gender equality and justice for women. So, we must fight harder.

A few key facts and figures: the Small Arms Survey estimates that there were over 1 billion small arms in circulation worldwide before the pandemic hit, produced by more than 1,000 companies from nearly 100 countries, with profits from the trade exceeding USD 8.5 billion. There are considerable linkages between legal and illegal markets with substantial numbers of legally acquired small arms entering illicit markets through diversion, corruption, seizure, and loss. The vast majority of global firearms, roughly 85 percent of the known total, belong to civilian owners, more than 850 million of them worldwide. Civilian ownership is also the fastest-growing market, as consumers buy more guns and as former military and law enforcement weapons gradually shift into civilian hands. In the US alone, 17 million more guns have been sold over the past months in parallel with increasing insecurity and tensions due to the pandemic, elections campaigns, and mobilization against racism.

Considerable reduction in global violence, which all countries have committed to deliver by 2030, will only be possible with the effective control of small arms and its ammunition. And it will only be possible with the heavy involvement of women. Why? First — to state the obvious — on their own, men have not managed this challenge all too well up to this point. Second, mobilizing more people and more groups in arms control is necessary in order to insert more power into the movement. Third, we know that this agenda is highly gendered. With the safety of women at stake, it’s critical that women are empowered to contribute with their knowledge and resources in the endeavor to protect themselves.

Armed violence destroys hundreds of thousands of lives every year. For women, this manifests in murder, but also in intimate partner violence, gang- and drug-related violence, suicides, and politically motivated attacks. It results in enormous amounts of fear, worry, stigma, and family care and socioeconomic problems. Marielle Franco, a Rio de Janeiro city counselor fighting for the rights of the LGBTQI, Black, and other marginalized communities in Brazil, was killed in 2018, having experienced all of this first hand. Same with Berta Cáceres, the Honduran indigenous and environmental rights campaigner murdered in 2016. And Karina Garcia who was running for mayor in a municipality in Cauca Colombia who was killed in 2019. Women in Latin America are killed at record rates. As do countless women on other continents. And since the pandemic has taken hold, the situation is worsening.

Of the estimated 70,000 killings of women worldwide every year, roughly 40 percent involve firearms. Guns are even more commonly used to injure, intimidate, and coerce women. The Women´s International League for Peace and Freedom (WILPF) also highlights how women and LGBTQI people face gun-related social and political inequalities, and pressures resulting from an increase in female-headed households, inequalities in access to survivor assistance, and higher risk of sexual and gender-based violence. Another reason why women should be heavily involved in arms control and disarmament is their knowledge of and information about what is happening at local community levels. Women are often best-placed in their communities to form networks of informants and gather critical information about tensions, alliances, key drivers, and triggers of conflict, and the ways to address them.

We know that peace agreements negotiated with women around the table are more durable and better implemented. And we know that peacebuilding and rebuilding after conflict are more sustainable where women are involved. Yet, women represented only six percent of mediators, six percent of signatories, and 13 percent of negotiators in peace processes between 1992 and 2019. Broad-scale prevention work is scarce and women’s voices seldom heard. Meanwhile, rape continues. Sexual harassment continues. Violence continues. The costs of war continue to pile up. And all of it is now crucial to address in the context of increased insecurity, polarization, “weaponization”, and escalating dangers of unrest and conflict following the pandemic, as outlined in the UN Secretary-General’s last report on Women, Peace and Security. Major reductions in global armed violence will not be achieved without having full and equal participation around the table and a better understanding of the gendered linkages between the various forms of violence and dynamics of violence, insecurity and fragility. The UNSG argues that this is, fundamentally, “a crisis prevention agenda.” It is time to address gender inequality, discrimination, and conflict risks more seriously. Women are survivors and agents of change. We need to alter the narrative about women in small arms control — changing their representation from victims of violence to survivors, and to include their perspectives as influencers and leaders, imbued with the power to call for peace.

With few women around the table in arms controls discussions and peace negotiations, we also lose out on talent. After all, if we want to assemble the best minds to tackle our problems, why recruit from only half the population? By the same token, we need to converge the agendas of small arms control and the broader Women, Peace and Security Agenda. It’s crucial that women help to build the knowledge and evidence base for programming and policymaking, using approaches such as those laid out by the Small Arms Survey’s handbook. Essential efforts must also be made to adjust norms and values, address social stigma, fear of retaliation, and cultural acceptance of domestic violence which often dissuades women from reporting violence to the police and/or engaging in violence reduction programs or arms control.

So, we need to organize. And we need to build networks: stronger networks. We need to exchange learning and experiences, building bonds of knowledge and support. The Gender Equality Network for Small Arms Control, hosted by The Pathfinders and sponsored by Germany,aims to make small arms control more gender-responsive and works to amplify international, regional, national, and local best practices among civil society organizations, women’s groups, conflict prevention, and development communities. The Pathfinders are aiming for further accelerated action in this area. And there are already several strong women involved in arms control and violence reduction, like Dr. Scilla Elworthy, Ghida Anani, Kasha Nabagesera and the SRSG on Violence Against Children, Najat Maalla M’jid.

Some say a woman’s weapon is her tongue. We say it is the networks, the solidarity among us, and the force of the fearless female combatants that have gone before us.